As with Pierre de Courbertin’s 1908 Olympic adage – “The most important thing is…not winning but taking part; the essential thing in life is not conquering but fighting well” – artists and designers often derive most pleasure from the act of making and not the finished product.

I often find equal if not greater pleasure in seeing a skilled designer at work than in looking at their completed work. Understanding how something is made, having an insight to the way in which a person perceives and develops a design fascinates me. Seeing how a particular effect or technique is enacted gives me, if only for a moment, the hope that perhaps “I too could do that”. Small steps understood give me an ambition to emulate.

It is sometimes difficult to unpick the many elements of a finished work. Many of us can identify with the experience of standing in front of a painting, pondering how it was done and trying to get inside the mind of the artist. With complex works this can be challenging. Deconstruction requires us to hold ideas of context, motivation, emotion, perception and many other things in our minds at the same moment. Seeing the work as it is being made or having access to the materials of its making can help us to see beyond its surface and appreciate it in a new and deeper way.

One of the enduring joys ( and exquisite frustrations ) of looking at original work by Charles Rennie Mackintosh is that I can never quite understand how he did it. I have learned to just enjoy being in the presence of something which, if I see it often enough, may reveal some of its maker’s intentions. After seventeen years of giving tours to visitors at 78 Derngate I was still seeing new things in Mackintosh’s work there. A few years ago at a Mackintosh symposium in Glasgow it was interesting to hear that he was known to be a “quick worker” at the drawing board. Mary Sturrock ( 1892 – 1985 ), who knew Mackintosh personally, described how he was not like other people. “With one or two lines, with a pencil… he could make you almost tremble…he had this special extra power”. I have seen this speed of draftsmanship in Mackintosh’s drawings also. I enjoy and marvel at his extraordinary ability to convey in design drawings, often with just a suggestion of a line or detail, his vision for the finished piece. 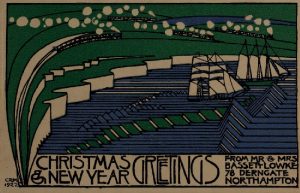 In 1922 the owner of 78 Derngate – ( a small terraced house in Northampton remodelled to Mackintosh’s designs in 1916-17 ) – commissioned a Christmas card design from him. Christmas – themed works from Mackintosh are rare – ( here is an earlier one ). The 1922 design is not an obvious seasonal subject but may, in its origins, be a reference to a well known Christmas carol. It comprised a stylised land and seascape featuring the trains and ships which formed the mainstay of the client W.J Bassett-Lowke’s model engineering business in Northampton. 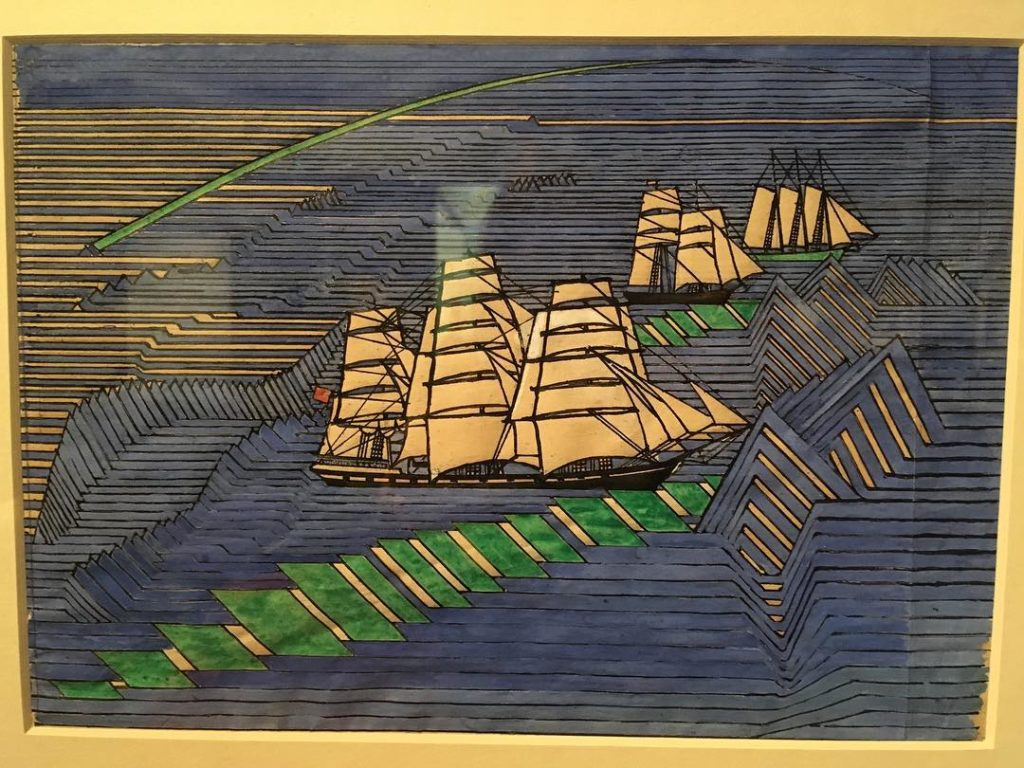 This Christmas card design drew upon another work by Mackintosh, “Sailing Ships” made around the same time. It shows, again in a heavily stylised seascape, three ships. The dominance of the horizontal stripes used to represent the sea is broken by the rhythmic waves which are drawn at sharp contrasting angles. Perspective is conveyed through the ever narrower stripes as the scene recedes and with the arc of abstracted green sea foam disappearing into a sharp point. Using just two colours with a tiny square of red for the ship’s flag, an exciting and dynamic composition has been made. The work is rightly regarded as being amongst the most avant-garde British graphics of the time. It is a delightful piece of great style.

A third work, a preparatory drawing of a ship; the same one which was eventually used in the forefront of “Sailing Ships” gives us a rare glimpse into Mackintosh’s design development process. However this ship does not appear in the Christmas card where its dominant place has been sacrificed to the client’s greetings inscription. The other two more distant ships are retained. The arc form has now been greatly developed into sea cliffs, an undulating landscape and four railway lines complete with little trains making deco smoke puffs as they speed into the distance. The latter, no doubt, a reference to Bassett-Lowke’s interests. 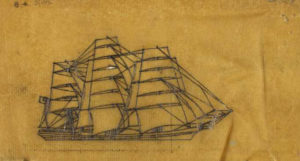 Stylised striped motifs seen in other Mackintosh works from this period include numerous textile designs, a wall treatment at 78 Derngate [ 1917 ] and another in The Dugout at The Willow Tearooms the same year.  In “Sailing Ships” and the greetings card the stripes become the seascape. Stripes and geometric shapes as landscape elements became a familiar device of the modern movement. Mackintosh’s work anticipates this and perhaps moreso here than in many of his other works we are made to think about how he might have responded to modernism. The work of an eighty year old Mackintosh is a tantalising, ever-unreachable domain but we can dream.

These surviving drawings tell the story of how a polished and original commercial work evolved. The inclusion of the schooner in “Sailing Ships”, then its removal may reflect Mackintosh’s response to a demanding client who was ever at pains to have his own name front and centre in all things. It is known that Mackintosh produced a large volume of designs for Bassett-Lowke that were never used, such was the exacting nature of this relationship driven in part by the artist’s need to secure his income.

It is known that Bassett-Lowke considered Mackintosh’s Christmas card as his favourite from all those he commissioned over many years.

At the time of its making this work was at the cutting edge of British graphic design; we can see the emergence of an ‘Art Deco’ style in what was to be the final period of Mackintosh’s working life. When compared with the style of the young artist it is clear how far he had come and also imagine what might have been.