A behind the scenes look by David Walsh at a recent visit to 78 Derngate by Celebrity Antiques Road Trip.

2017 was quite the year at 78 Derngate. Early on I was involved in putting together the Centenary Exhibition, “Charles Rennie Mackintosh & The Great War“. Featuring many original works by Charles Rennie Mackintosh, the exhibition was a great celebration of the 100th anniversary of his work in Northampton but also examined the profound effects of The First World War on his, then, struggling professional life. 78 Derngate is run predominantly by a fantastic team of volunteers who give thousands of hours every year to share this treasure of a house with visitors from far and wide. Very many of the volunteers also stepped forward to build and staff the exhibition for its three month run. It was an inspirational project made possible by inspirational people who, by their collective effort, sustain a world class visitor attraction for Northampton. I salute them.

We were fortunate to get lots of local TV and Radio coverage for the exhibition and this helped to bring in very many visitors to see it and of course 78 Derngate too. Even though we’re now in the Social Media Age one cannot argue with the reach and power of established media; TV gets to places and people otherwise impossible to reach. As the exhibition Curator I gave two short interviews [ BBC, ITV ] along with my colleagues to our local news teams; this was an interesting experience not least for the amount of time needed to produce something which only lasts a few minutes when edited for broadcast. So, in June when the House Manager asked if I was OK to be on camera for a brief interview for the Celebrity Antiques Road Trip I thought “yes please” partly because I enjoyed the previous interviews and the benefits they brought visitor-wise but also I was excited to see who would turn up. My colleague Barbara has made it clear that if Brad Pitt ever visits 78 Derngate she has first dibs on any hosting. Brad is a well known Mackintosh fan who apparently does a bit of acting too and Barbara has very many questions she wants to ask him about acting. I was ready to yield should Brad be the visiting Celebrity but as it turned out, sadly for her, he was elsewhere that day. 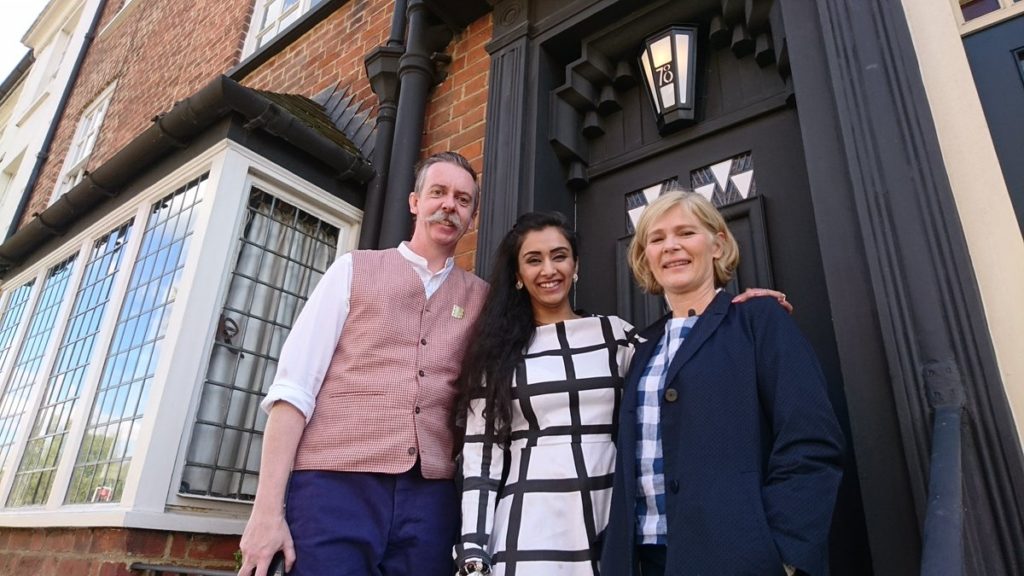 David, Roo and Clare on the doorstep of 78 Derngate.

I was delighted instead to meet Clare Holman, known for her many stage, film and TV roles especially “Inspector Morse” and “Lewis”. Clare was accompanied by antiques expert Roo Irvine, at that time fairly new to the Road Trip team but now a familiar face to viewers. Roo was wearing a spectacular dress featuring a monochrome grid which was a perfect choice for 78 Derngate and might well have been designed by Mr Mack had he turned his hand to fashion. Clare was the essence of professionalism and it was fascinating to see how an experienced performer operates. Understatement and nuance seem to be essential skills for on-screen. 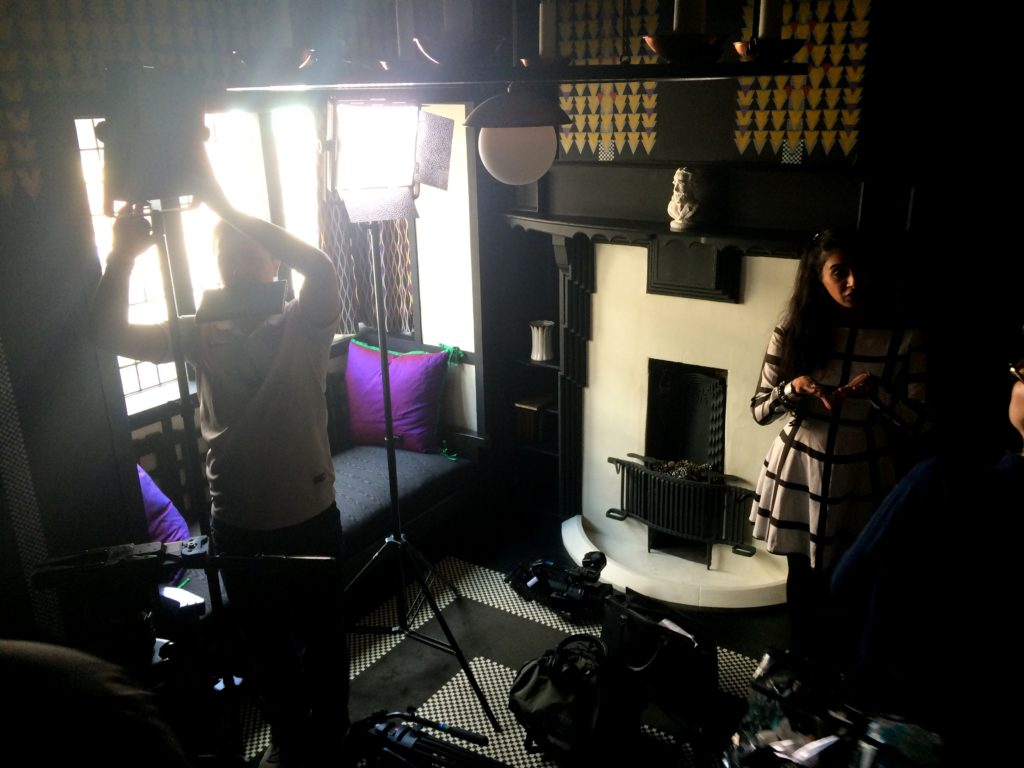 Setting up, with little space to spare, in the famous Hall Lounge of 78 Derngate

The Road Trip team is very efficient and it was obvious that they knew what they wanted to get from the visit and that they’d done their homework too. The narrative of the ‘story’ to be told had already been sketched out. The plan seemed to be that we would follow this loose outline but have a fairly natural conversation on camera aiming to include all of the key bits of information about Mackintosh and the house. I liked the fact that a makeup artist is part of the team along with several production staff who did everything from equipment rigging to direction and camera work too. It was also interesting to see that the equipment used is very portable and lightweight. Battery power for everything meant that very few trailing cables were needed – a boon inside the small, precious interiors of 78 Derngate. Hot TV lights are a thing of the past, certainly in this scenario, as the lighting was all from cool bright LED units; again brilliant in avoiding any risk of damage to the decor.

The opening ‘scene’ – Clare and Roo arriving at 78 Derngate was recorded in the street by the front door of the house. Battery powered radio mics captured the speech against the busy traffic on Derngate. The scene was repeated a few times and was shot partly from across the street which attracted a bit of attention from people sitting in the traffic queue waiting for the lights to change on the corner. There were several double takes from drivers spotting a famous actor in Derngate. Visitors to 78 usually arrive at reception two doors down so this arrival was unusual because we would be going in to the house through the famous Mackintosh front door. All of the team, on and off camera, were buzzing with excitement when they first entered the house. The makeup artist audibly squealed. I have seen this effect on visitors many times but the delight from their enjoyment of entering these fabulous Mackintosh interiors is always a joy to witness.

The shoot went in two main phases. The meet, greet and on-camera chat about the house which was then followed by detailed photography of all the interior design details throughout the house to be used for later editing and compilation. This second phase took a great deal of time compared with the first so while the camera team were doing their stuff I accompanied Clare and Roo on an informal tour of no.78 which was great fun and they seemed to be having a good time discovering and taking their own photos of all the details. 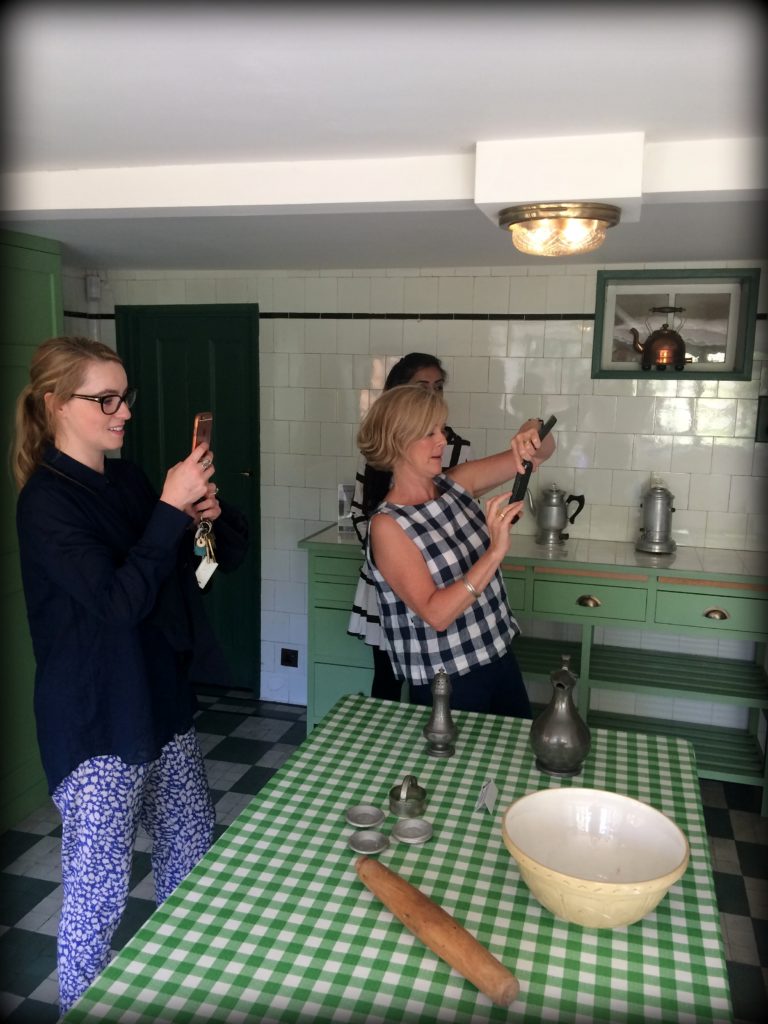 Photoshoot in the kitchen. 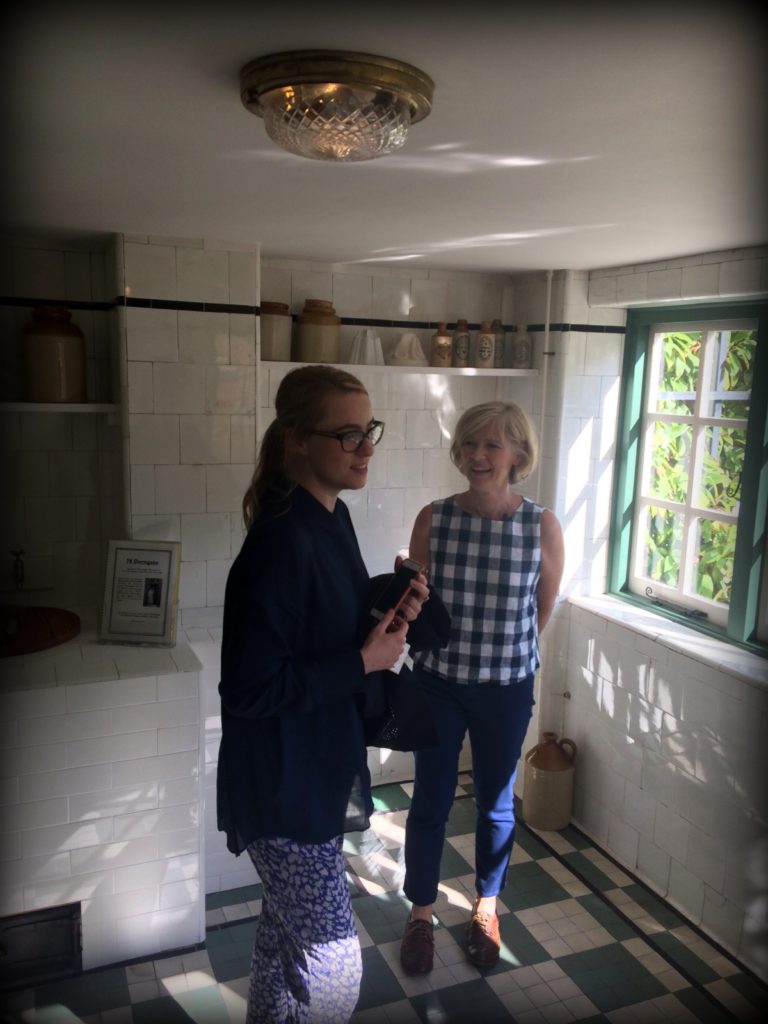 In the kitchen at 78 Derngate

Outside on the beautiful terrace the jasmine was in full summer flower and the intoxicating fragrance was much enjoyed, by Roo especially; so much so she took this lovely photo of it. 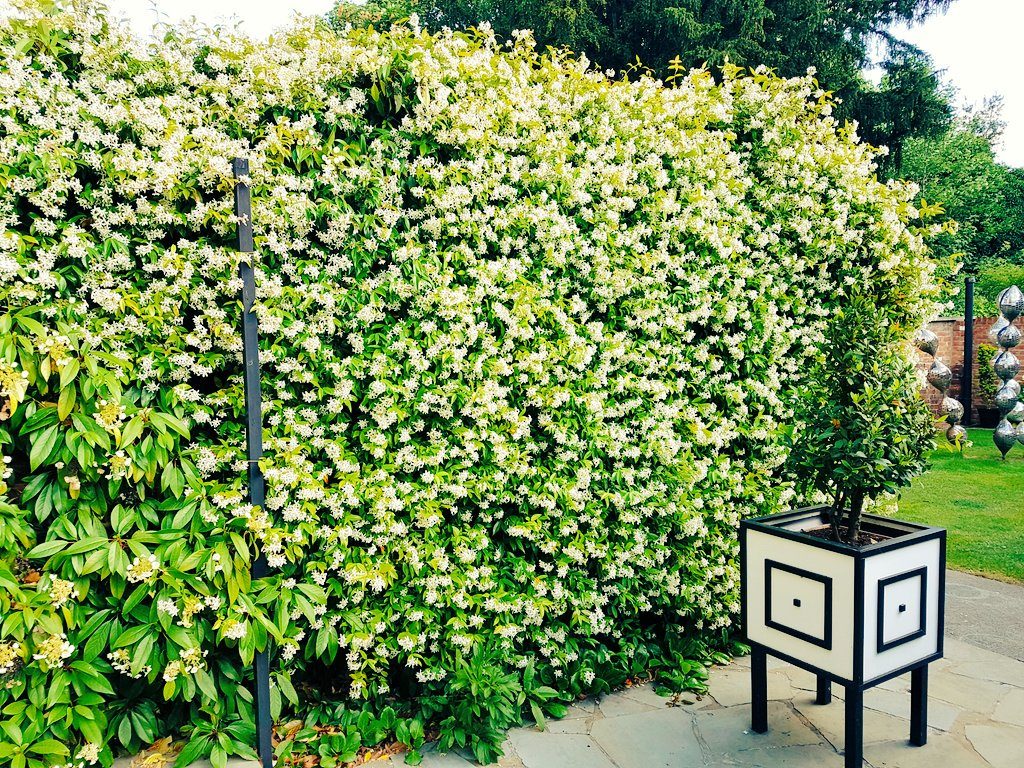 Jasmine on the terrace at 78 Derngate.
Photo: Roo Irvine

All too soon it was a wrap and the crew packed up, jumped in their minibus [ sadly no vintage cars ] and headed off for some R&R before the next stint of their Road Trip.  It was an enormous pleasure to welcome everyone and to help share marvellous 78 Derngate with the Celebrity Antiques Road Trip audience. We can’t promise camera crews for every visitor but everyone gets a warm welcome at 78 Derngate – make a date to visit! 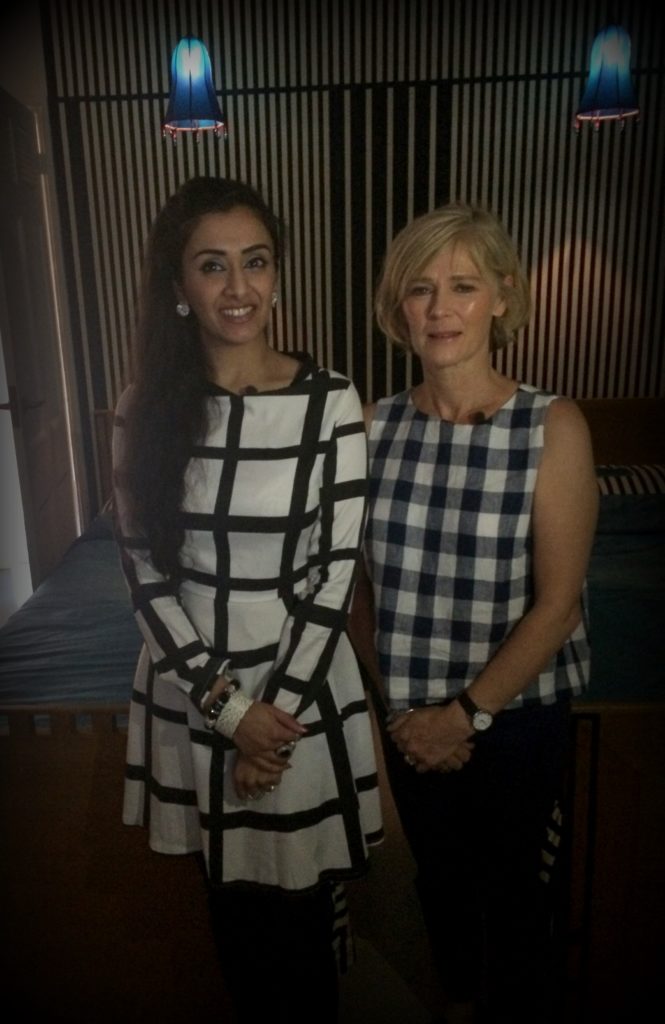 Roo Irvine and Clare Holman in the famous Guest Bedroom at 78 Derngate.

If you watch the episode
For those in the UK the episode featuring 78 Derngate was available until around mid January 2018 on BBC iPlayer.
Repeats of the episode will also feature on the iPlayer shortly after broadcast. The section about the visit to the house begins at around 18:20.